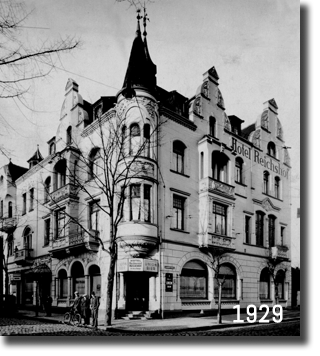 The stones of the Reichshof Hotel could tell many an entertaining good-night tale of its hundred and one years, but the old stones from its founder’s time don’t describe the experiences of that good old hotelier, of Kaiser Wilhelm and Peter Frankenfeld. That’s why the present hotel boss, Jutta Max, lets print do the talking. She provides an illustrated chronicle of the nostalgic building in the 16 modern rooms, as reading material for her guests.

The brochure that was produced with the co-operation of Gunther Gerke and Otfried Altfeld answers the first question that visitors have. Again and again they ask the experienced owner/manager, “Has this always been a hotel?” It certainly has, and in 1899 Mayor Emil Rohrmann gave permission for the new building by the station.

On 1st December 1900 it was opened under the name “Kaiserhof”, with its turrets and its oriel windows. Above the restaurant, where the Head Waiter in his tails served the distinguished guests, were a salon that could accommodate 100 and generously proportioned hotel rooms.

“Look, look, even Schwerte has an Imperial Court”, Kaiser Wilhelm II is said to have gasped, getting out of his special train on 10th August 1909. With the end of the monarchy, the name disappeared and was changed to ‘Reichshof’.

After several tenants had run the business without much luck, the restaurateur Heinrich Max from Olpen took it over. With expertise and effort he got the place back on its feet and bought it in 1938.

The business even survived a bomb exploding in front of the façade and being requisitioned by the organisation ‘Todt’. It was one of the first in the post-war period to open its doors again. A long list of prominent people came to appreciate the atmosphere of the Reichshof when on tour, ranging from the Berlin Philharmonic, Olga Tschechowa to Heinz Sielmann.

The hotel still deserves the title, ‘home to the artists who appear in Schwerte’, and is now run by Jutta Max, the third generation of the family to do so, who took over from her father Karl-Heinz Max in 1966.

The three-generation family lives under one roof, the same combination of the modern and the past, just as the hotel has managed to keep its atmosphere in spite of all the changes over time.
‘Schwerter Zeitung’, 29.9.2001 (rs)

Gehe zu URL (go to url). Here you can download the Hotel Reichshof Chronicle.
(only in German)

Here you’ll find a video from the television programme ‘Lokalzeit’ from the channel WDR, (2001).
(only in German)